First off let’s get the pronunciation of Cannes right. People here on the east coast  of the USA say CAHnnes, in a hoity-toity way. One friend corrected me when I said CANnes, France. So I looked it up and lo-and-behold my high school french didn’t fail me, it IS “CAN” rhymes with fan.

The reason to get the pronunciation correct is that the film I worked production on last summer, American Honey (see my post…A Little Renaissance Renewal) was accepted into the prestigious International Film Festival and premiered in Cannes on May 12th. I was invited to go and offered a ticket but I would have to find flights and accommodations for myself. All this seemed overwhelming to plan in a few weeks and I didn’t think about it too seriously until my daughters all said, “YOU HAVE TO GO! This is a once in a lifetime experience!”

Once I decided they were right, the plans fell into place. I used airline miles to get a free flight to London and decided to go to Stratford-upon-Avon for a day and see Shakespeare’s town. A friend on the production crew of the film was driving from northern England to Cannes and graciously agreed to have me tag along. Thus the plot was laid for a great whirlwind of a trip. 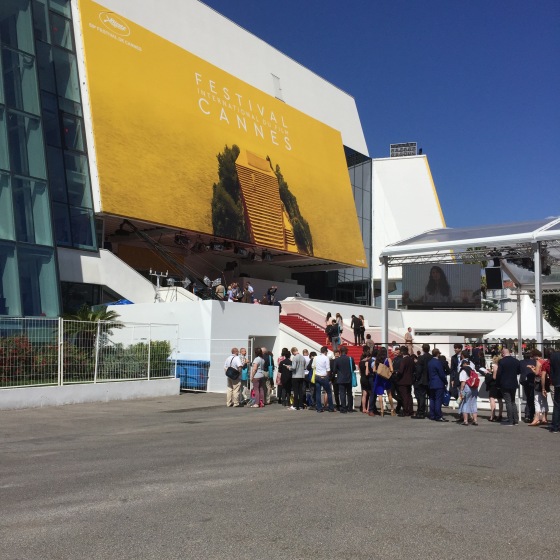 As for Red Carpet attire, I had no time, or desire, to buy a fancy gown that I would only wear once, so my sister, the stylish one, suggested I go with a simple black dress, which I happened to have bagged in my attic. Standing in as my Fairy Godmother, she had me try on her closet collection of amazing shoes, and I chose the perfect pair, borrowed a belt and clutch, gelled my nails, bought a pair of bead earrings and put my hair up with some beautiful jeweled pins from my daughter. Cinderella transformed on a low budget.

Everything worked out with such finesse that each moment was full of magic. Arriving at the London airport I waited a few minutes for a car to take me to Stratford-upon-Avon, Shakespeare’s birthplace. In the car, excited but exhausted, the driver asked if I would like some music and I said “sure!” If these blog posts could have a soundtrack I would have Adele’s Hello starting now… Soon I was humming along to the very appropriate lyrics welcoming me to England…

Hello, it’s me, I was wondering if after all these years you’d like to meet…

I was dropped at the darling Adelphi Guest House that I found through my Rick Steves book and was met by the charming host, Simon, and provided tea and cake. Sensitive to my bleary, jet-lagged state, he sat with me and oriented me to the town with a map. I could walk right down the street and be in the thick of Shakespeare-land. It had been a long time since I had slept but was determined to stay awake and explore.

I went straight to the Royal Shakespeare Company, bought a cheap ticket to see Cymbeline that evening, enjoyed a quick stroll along the river, then dinner at the charming old Garrick Inn. I decided against the “smashed peas” with my fish and chips but a friend had recommended I try the sticky toffee pudding with custard, a delicious, concoction of yummy sweetness. I chatted with a nice couple from Minnesota at a table next to mine. They were walking the Cornwall Coast about 9 miles a day and staying at different inns each night. I might need to put that on my dream travel list? 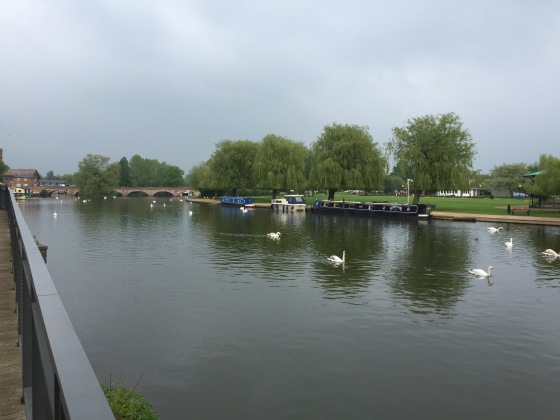 Cymbeline was terrific even though I was SO jetlagged I found it difficult to keep from nodding off and had to pinch myself and do ankle lifts, then resorted to caffeine at intermission. That same couple from dinner was seated in my row and I also visited with some ladies next to me from Yorkshire that come to Stratford to see plays every year. The play needed cutting (over 3 hours long) but it was modern and hip, with gender swapping (Cymbeline was a female King, and the Queen, her husband, a male), which worked really well. A delightful evening of theater. 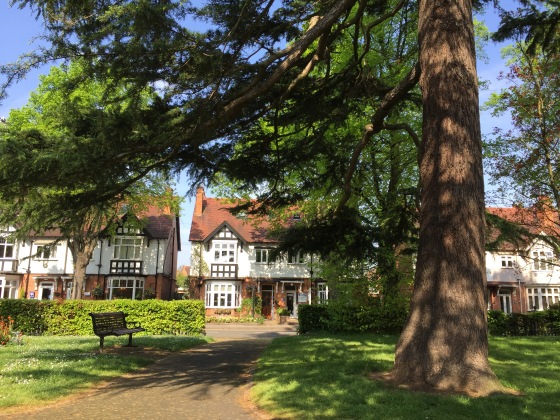 I stumbled my way back to the guest house, so tired that I must have looked drunk, fell into bed and then was wide awake, probably all that caffeine. But I slept eventually and awoke to a lovely breakfast served in the dining room.

This was my day to fully explore the town where Shakespeare lived, courted, and died. Yes, it’s touristy, but I now have a visual of the area, his house, the river, the church. I toured his birthplace first, so interesting with beautiful gardens where bad actors were doing scenes from his plays. But the house was wonderfully restored and so delightful to see where Shakespeare slept, made gloves and got into mischief. I walked my toes off, getting blisters, and enjoying even the touristy side of things. Everywhere you look there’s a Shakespeare quote. I sipped tea and had a scone in a most gorgeous garden at Hall’s Croft (Shakespeare’s daughter’s house) and had a Titania quote on my cup…”Feed him with apricots and dewberries, with purple grapes, green figs and mulberries” ( Midsummer3.1) 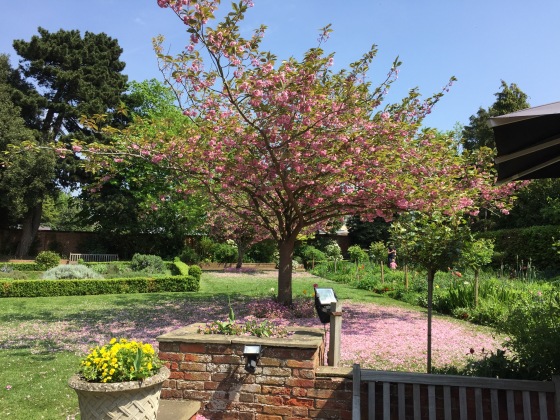 It was when I got to the church that I really “felt” Shakespeare the most. Trinity Church is where he was baptized, married and buried. It was holy somehow and I slowed down and really listened, sat and meditated on history and took time to breathe in the experience of being in a place where Shakespeare walked, talked and prayed? It struck me that he returned to his roots after finding fame in London, and went “home.” Do we all long for that return and feel the pull of our ancestors and the familiarity of places and moments lived previously?

For sanctuary on the door

From the church I walked out to Anne Hathaway’s cottage imagining Shakespeare walking there himself to court his future wife. The cottage is gorgeous with thick thatched roof and gardens to explore. I stopped at a pub on my way back and had a terrible salad that I waited 45 minutes for but at least I was outside enjoying the sunshine and the dogs that were in attendance.

I strolled back to the guest house to pick up my suitcase and wait for Paul to pick me up for our drive to the overnight ferry out of Portsmouth. I was able to see everything I had hoped to see and now was ready for the next adventure. Stay tuned as I meander toward France, Red Carpets, designer dresses, and Russian palaces!

Berkshire snow day!
A cold night in a small holiday town after hearing a beautiful baroque choir. I'm living in a Hallmark movie.
A bright spot during my pandemic confinement, and now named in the NYTimes as one of the top movies of 2022! Congratulations to all that created this beauty of a film!
By the pricking of my thumbs...today at 4:30pm-Macbeth, at Shakespeare & Company! Final show in the Fall Festival of Shakespeare! Streaming and live!!! Go Chatham High School!!!!
Wonderful to see DOWN WITH THE KING at the Sandisfield Arts Center with the director and fellow actors in attendance. Grateful to be surrounded by a full house of generous people when seeing myself on a large screen for the first time! @downwiththekingfilm