I’ve been sick for almost two weeks so I have been home in bed more than I have in years. I’ve read three books, given to me in various places along the road that I have not previously had time to read. One of them is wild, Cheryl Strayed’s book about her hike along the Pacific Crest Trail from California to Oregon. It was a great read, especially for an adventurer like me, that is stuck on the couch. I’ve also resorted to watching Ken Burn’s National Parks series on Netflix. Since I can’t get out and hike I’ll watch great film of my favorite places.

I’ve contemplated nature more and more over these weeks of being deprived of her, why it changes me, satisfies a place inside my soul, makes me feel complete. I heard somewhere, I’m not sure where, “nature gave me my voice.” That is how I feel. In a constrained society where I am encouraged to become something fake and not be satisfied with what I am, nature does the opposite. She assures me that I am exactly who I am meant to be and to be content with all I am. She steadies me as I start spinning out of control. She’s my drug, the bottle I reach for when I’m losing perspective. John Muir puts it so well in his writings…

“Thousands of tired, nerve-shaken, over-civilized people are beginning to find out going to the mountains is going home; that wilderness is a necessity…”

But I’ve not been able to go out. My cough and constrained breathing have made it so that rest is the order of the day, but even thinking about nature, reading and watching movies about our great parks has helped to keep me centered, and given me a longing and kept up a hope that soon, I’ll be back to the trees, rocks and hills. 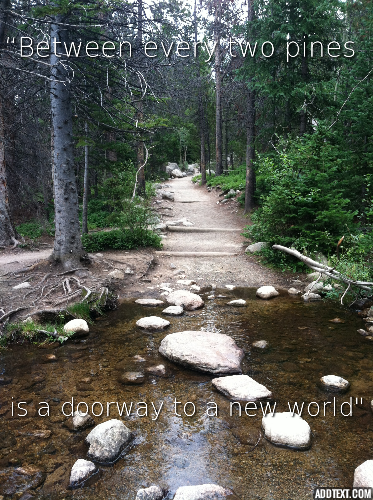 Something else has been niggling the back of my brain during my convalescence. And maybe if I write about it here it will become clearer. I have been pursuing teaching Shakespeare to kids with a devotion, single-mindedness and belief that this will change kids’ lives and offer them beauty, and rites of passage in the tricky time of adolescence. I’m making that dream come true, unbelievably so. In a short time I have been able to see this desire become a delightful reality. Great!

BUT…why is there always a BUT? I also have a deep desire to be an actor. Because of the teaching goal, acting has been put on the back burner. Why? I find it easier to go after a dream that benefits others. Acting, on the other hand, is mainly for ME. It makes me so happy to perform. If I believed in the need for my talent to be on stage as much as I believe that kids need this outlet of performing Shakespeare, then I would be out there auditioning and selling myself without hesitation. But no, I hold back, feeling selfish, thinking my acting is only for me, the icing on the cake, the extra treat, dessert after the main meal of helping people.

I see the failing in this philosophy. I should be viewing my acting talents in the same way as I see my teaching. I really believe that the arts have the complete ability to change lives, but typically to make a living as an actor you have to audition for any and everything and do crappy stuff to just make a paycheck. I’ve done stupid commercials  and industrials just because they pay me more in four hours work than I would get from two weeks of teaching. But satisfying or helping anyone, they are not.

I need to find the acting work that I know makes a difference. Most theater is not doing that in my opinion. It is interesting, fun, shocking, entertaining, but rarely do I leave a theater changed. Tina Packer’s Women of Will series in NYC was the exception. I left each of those 5 parts enlightened and inspired to make my life worthwhile. She spoke of women in the later Shakespeare plays being redeemed by nature and I can’t wait to study this and bring my three favorite subjects together, nature, women and Shakespeare. Where that will lead I have no idea today. But it gives me hope that I can bring together all of my loves and then have something to pursue wholeheartedly that can satisfy the performer in me as well as the giver.

Right now I am imbalanced, tipping the scales to the selfless giver and smart enough to know that I will deplete my reserves if I don’t also pursue the delight of my soul in acting. But I must find the purpose in it because the drive to make it happen is just not there otherwise. I audition halfheartedly, it’s my JOB. I’m not really passionate about being part of a company without the belief that I should be there.

So this is where my head has been while my body is wracked with hacking coughs and sinus headaches. As I heal my body, I’m working on my soul and mind too. There is great power in going after a dream when you know you are meant to do it without a doubt. There is a lot I can learn from nature, and nature lovers, even from my couch.