This has been the longest stretch of silence since I started blogging over a year ago. I have been directing A Midsummer Night’s Dream in a middle and high school residency for the last 7 weeks. It was intense, driving 45 minutes each way, auditioning, directing, planning, costuming, teaching, making mistakes, studying, caring deeply, always trying to improve and control 50 rambunctious and varied-aged kids. It was probably some of the toughest teaching I will ever do. My directing partner has had many years of experience directing here at Shakespeare & Company and he said it was the hardest group he has had to deal with.

That said, it was also highly successful, with kids taking huge risks and finding that they have the courage to succeed. One of my favorite moments was after our dress rehearsal. A 6th grade girl came up to me with glowing eyes to tell me that she couldn’t wait to get on stage for the performance. She was on our tech team and did not want to be onstage at all so we cast her on the lighting crew and she excelled at the design and board work. The last week of rehearsal we needed a few kids to hold banners in the background of the opening scene and she was recruited. She told me she has horrible stage fright and was petrified to just stand there holding a flag. But after dress rehearsal she said, “It was the most fun I have ever had and I wasn’t nervous at all. Next year I want to act!” This made all the frustrating days of anguish worthwhile.

Speaking of anguish…I had a long discussion with some of our boys about respect. Bringing together kids from all areas of school that don’t normally interact is a challenge, but also one of the reasons the program is so fabulous. We encourage all kids to participate finding areas that interest them and hopefully hooking them in to using their skills and talents for the benefit of all. But we had some very wild boys that, at times, treated each other with disdain, using threats and racial slurs which are not to be tolerated. In their brutal world, this type of behavior is normal and the only way they know to survive. It’s such a vicious cycle of violence and revenge, and someone has to choose to stop it. It was heart-breaking to witness (“I don’t like it when you disrespect me, well I don’t like it when you threaten to break my fingers…”). I did my best to get them to talk and make do-able requests of each other. I want them to see a better way so badly, but we only took baby steps toward it.

In the final evaluations this diverse group of honors, at-risk, and special needs students wrote how great it was to be with others that they had never interacted with before. “I learned how much team work is needed to make a show like this happen and to do something i’m scared of, by being couragouse.” I watched as the high school students became mentors for the younger kids, even a young man wielding a curling iron to help get the fairies ready for performance.  At a time when Shakespeare is being cut from some school curriculum it is imperative to provide a place to expand the world of language and humanity into adolescent lives.

So all in all it was a fabulous 6 weeks. Parents were glowing and heaping praise on our efforts. Shakespeare & Company staff helped in so many ways, driving 45 minutes to the school to see a bunch of kids perform and then tearing down the set, picking up trash and loading up the van all from the goodness of their hearts. It is the reason this company is so wonderful to work for. My boss, a founding member of the company, was mopping the floors of the gym as I was regaled by grateful parents that insisted we must return next year.

The kids too, were full of requests and hope that we come back, with tears, hugs and proclamations about how much we will be missed. They reached new heights, and conquered the number one fear of public speaking (even above the fear of death), and did it while speaking some of the most difficult language written. That is what I call success. It is why I am willing to work here for less than minimum wage. Of course there is a huge list of things I would like to improve next year, but I can be content with what we accomplished and build on that. Giving kids opportunities to grow and changing the world one human being at a time, is a goal that has me beaming with pride. 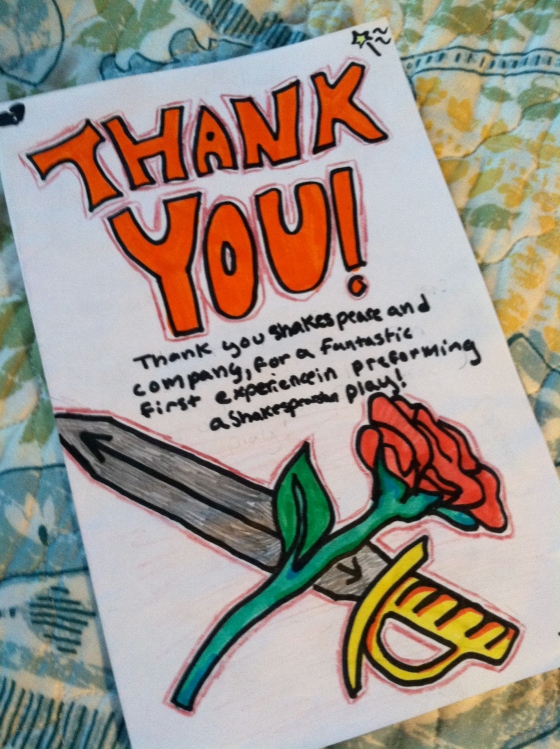 I may not be traveling the country and hiking National Parks, but I have been providing Rites of Passage for kids and this was a beautiful, steep mountain to climb. I will try to get back to posting regularly on the next installments of my journey.

6 thoughts on “Been a long time coming…”

Berkshire snow day!
A cold night in a small holiday town after hearing a beautiful baroque choir. I'm living in a Hallmark movie.
A bright spot during my pandemic confinement, and now named in the NYTimes as one of the top movies of 2022! Congratulations to all that created this beauty of a film!
By the pricking of my thumbs...today at 4:30pm-Macbeth, at Shakespeare & Company! Final show in the Fall Festival of Shakespeare! Streaming and live!!! Go Chatham High School!!!!
Wonderful to see DOWN WITH THE KING at the Sandisfield Arts Center with the director and fellow actors in attendance. Grateful to be surrounded by a full house of generous people when seeing myself on a large screen for the first time! @downwiththekingfilm