Even though February was a dreary month, I did get out for some spectacular hikes. If I am here another winter I definitely need to figure out better footwear for the snow and ice hikes. I have loved the Brooks Cascadia trail runners that have climbed mountains and descended canyons with me, but they just don’t quite cut it in the wet snow. Things are starting to thaw here and mud season is coming. I have been forewarned that it will not be a pretty sight. Just the name “mud season” sounds bad.

I clomped my way down the Keystone Arch Bridges Trail in a couple of feet of snow to see stone arches bending over the beautiful river that were constructed entirely without mortar back in the 1840’s. Some are still used today, and have not needed maintenance in the last 91 years. Like the Roman arches of the aqueducts they are an engineering wonder.

Just as I was photographing the double arch a train passed over it. It was a thrill to watch the hundred or so railroad cars pass by and know that some things do stand the test of time. 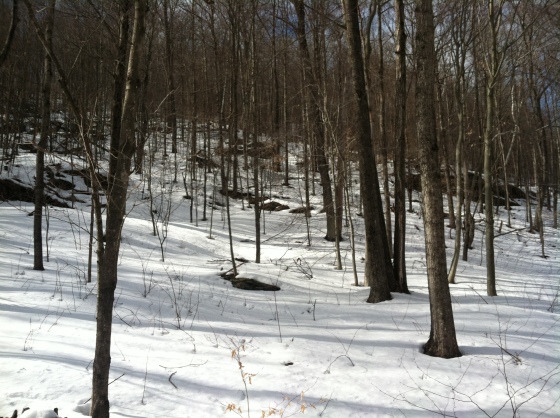 Further along the trail the snow melting off of the rocks left a speckled appearance and reminded me of those Beverly Doolittle paintings and I half expected some pinto ponies to wander through the landscape in camouflage.

The trail was not plowed but there were narrow tire tracks and the best way to maneuver was by putting one foot exactly in front of the other like a runway model. I giggled as I practiced my model walk swaying my hips drastically to swing my foot forward, thinking I had to be the only crazy girl out in nature pretending she was a runway model. But it was better than tramping through 2 feet deep drifts. 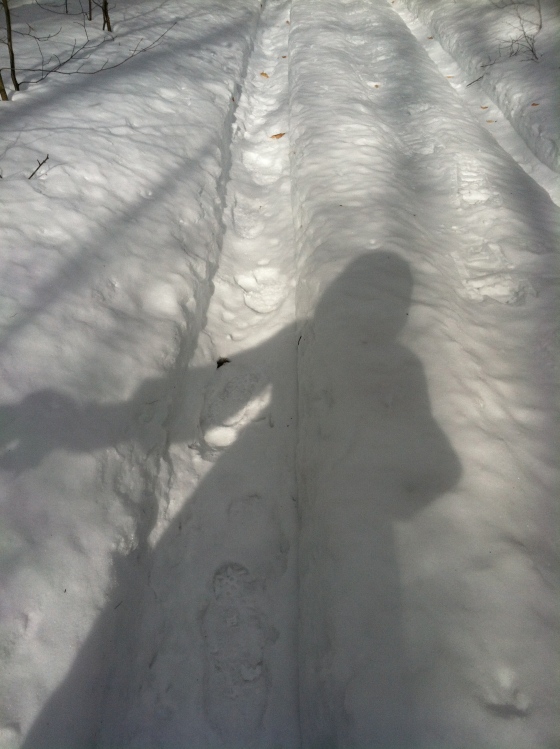 My shadow on the “runway”

The sun poked through the clouds and smiled at me, encouraging me that winter would eventually come to an end. On my drive home I took a quick detour to see the famous Jacob’s Pillow Dance Festival. As I drove around a corner there was a gaggle of wild turkeys! Who would have known that there were turkeys running around here in the woods? Well, I didn’t! We have them in California, but I thought it would be too cold here for the poor guys. They ran across the street with their bright red and blue heads and wattles flapping like something out of a Warner Bros. cartoon. 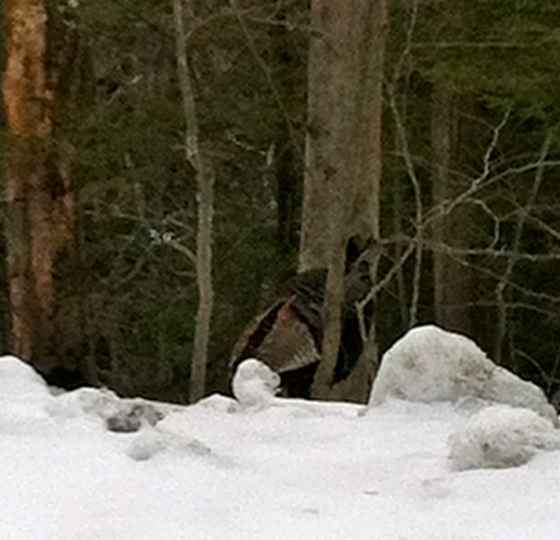 My turkey hiding like one of Ms. Doolittle’s ponies!

A few days later I headed out to Tyringham Cobble for another delightful hike. It was incredibly beautiful starting out in pastureland on the side of a hill with views of quaint houses and a white church with a steeple.

The turkey theme seemed to follow me as I saw tracks in the snow of big, bird-like feet so my imagination claimed they were turkeys. I saw wild paw prints following the turkey tracks and I was horrified that I might come upon a blood bath with feathers and wattles the only remains. But thankfully I was spared the gruesome visual and left it only in my imagination. There were also thick vines that were winding their way up the side of trees choking them to a slow death. All this reminded me of a monologue that I am working on that speaks about the world being cruel and terrible as well as oppressively astronomical. Mother nature can be wantonly evil and wickedly beautiful. 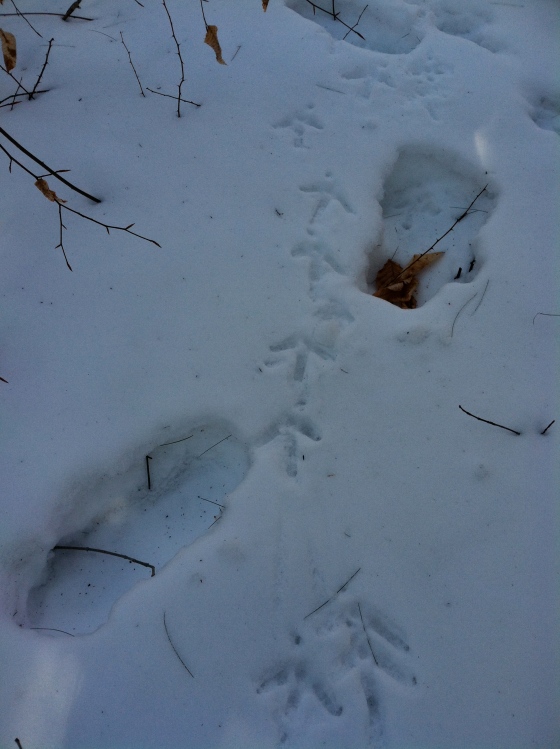 I reached the top of the cobbled hill and looked out upon a wonderland of beauty, clouds, mountains, fields dotted with barns, it was breathtaking.

And as I continued on my way down, passing through turnstile fences that made me think I was in rural England, a song appropriately came singing on my phone… 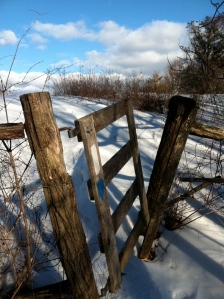 Feel the wind across our face

We’ll have some fun, gonna dance on the run

It’s a perfect day to break away.