I love Colorado. The mountains, the waterfalls, the small towns, the blue skies, and driving around a corner and seeing wildly beautiful rock formations. I stopped in Ouray, CO, an adorable town known for its hot springs, and had lunch at a rooftop restaurant overlooking a darling main street. It also looked out upon a bridge high in the cliffs and in asking about it, I found out that it overlooked Box Canyon Falls.

After lunch I explored the hike to the falls and enjoyed the public but rather busy park. I also peeked in at some hot springs but decided I was already hot enough with the weather in the 90’s and that I would push ahead to Montrose and call it a day. The views on the way were amazing and I pulled off and drove on dirt roads to catch a photo of beautiful pastures and hills where the light was playing games with their sandy banks. 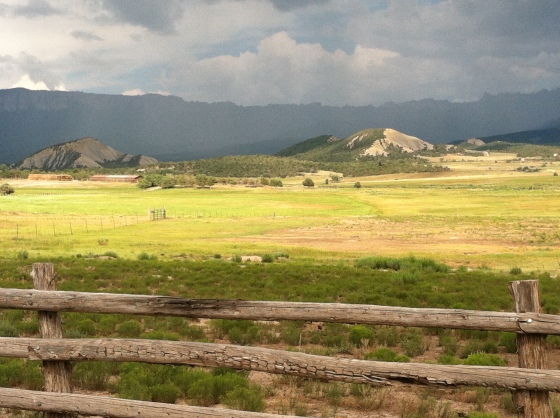 The next morning I went to the Black Canyon Gunnison National Park. I love our National Parks, and this one had a unique dark, stark beauty. I took the drive to the overlooks to get an overall view and then took a short hike on the Oak Leaf Loop trail. It was so hot and steep that I turned around after 20 minutes and felt like a wimp. But I just wasn’t feeling up to hiking and gave myself a “get out of jail free” pass and called it a day.

So after my hike I went back did some laundry and cast about the town for activities. That evening they closed down traffic on main street for a festival. It was raining so I donned my raincoat and joined the few stragglers willing to get wet, but it was kind of sad. There were a few bands playing huddled under storefront doorways but I was the only one that stopped to listen.

As I walked down the middle of the closed off street I saw a pinto horse tied up in front of a shop. Who can resist a horse parked on a sidewalk? Well, not me and I went over to say hi. His name was Blondie, I buried my face in his mane and breathed that wonderful horse aroma. I couldn’t mistake his owner as he sauntered my way. He was wearing chaps, boots with spurs, a bright blue unbuttoned shirt, handkerchief tied around his neck, with tall cowboy hat, long curly gray hair, vest and silver belt buckle. I thought I had walked onto a wild west movie set.

We exchanged introductions and Eddie hopped on his horse and rode off slowly down the middle of the street with a wave. I went on my merry way uplifted by the simple fact that the cowboy legend is alive and well in the middle of Colorado.

The rain was gradually stopping about the same time that the booths and shops were closing their doors, and the dusk was turning to dark. As I was walking back toward my car, Eddie and Blondie were clomping up the street toward me. Eddie remembered my name and I asked if he knew any places that had karaoke. He pointed me toward a bar at the end of the street and said he may join me there later, and with a tip of the hat he was off.

I checked out the bar and it was not karaoke night, but country dance night, the next best thing! The dance floor was empty but the music was great and I stayed awhile drinking diet coke. I made friends quickly and was introduced to Coon Skinner and two of his cousins. Coon Skinner claimed to teach country swing dancing and he was happy to take me under his wing and twirl me around the floor. 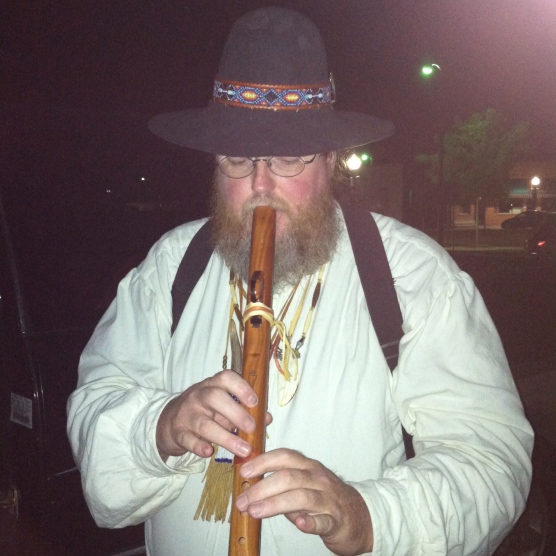 I just shake my head at my great fortune to meet the most interesting people. Coon Skinner is a mountain man, “You can go home and tell everyone that you have met a real mountain man.” When I asked what that entailed, he explained while pointing to his various articles of clothing, “I make my clothes and moccasins from buckskin that I, or my friends, shoot. I do everything like they did in the 1800’s, I light my pipe with a flint instead of matches and I go to Mountain Man Rendezvous.” When I asked about the rendezvous, he was excited to explain that they pass a jug around of homemade spirits, take a sip and pass it to the next guy and tell tall tales sitting around a campfire. Nothing is allowed at the rendezvous that was not available in the 1800’s. He invited me to come back in May and join him and the gang, “I’ll fix you up with the right clothes and you can wear those fringe boots. Since it’s your first year they won’t give you a hard time about the soles being rubber. Anytime you want to come back here you can stay in my guest room. I live on a 70 acre ranch. My family has been in these parts for 143 years.”

Coon Skinner showed me his hand-made flute and drum that he uses in ceremonies, his black powder gun and buckskin coat, and told me a story about Slim and his live skunk hat. “The skunk had been a good hat for many years and never asked for nothing so one day he asked for a swig out of Slim’s jug and after one gulp the skunk flew up six feet in the air and landed flat on his back and there’s two sayings that come outta that incident that are still used today. One’s ‘dead drunk’ and the other one’s ‘drunk as a skunk.’”

In the meantime Eddie had tied Blondie up outside the bar and was sitting next to me enjoying a Jim Beam and coke. He assured me that Skinner was a gentleman and trustworthy. We talked while Blondie butted up against the bar door and kept the tourists happy with his horse antics and charm. 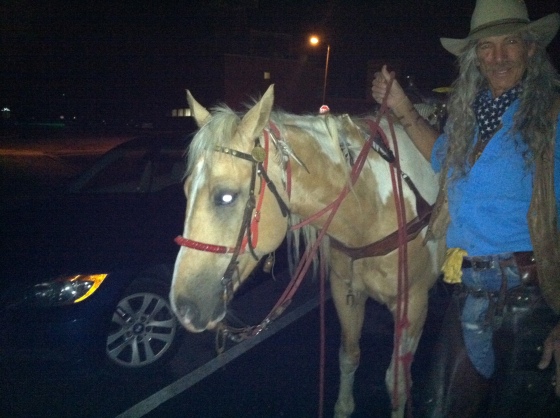 Eddie was outlaw sexy and country boy charming. He rides his horses everywhere, to the grocery store, to the mountains, horses are his only transportation. He was concerned that my car was parked 4 blocks away so insisted on perching me up on his darling cream and white horse to lead me to my car. By then the traffic was allowed back on the streets so we strolled down the sidewalk, waving at people as I passed. 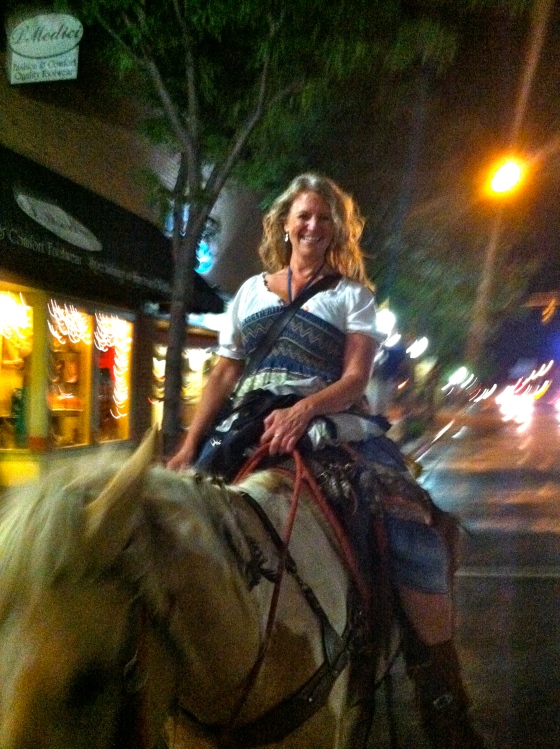 Somehow in all the fun and excitement, I dropped my raincoat while riding. When we discovered it was missing, I hopped off of Blondie and Eddie leapt on and galloped, yes, GALLOPED, down the  street back along the path we had just walked to find my raincoat. I stood there watching, just shaking my head. My life is full of such adventure. How many times will I get to see a real live cowboy ride off into the dark to rescue my raincoat? He came charging back, raincoat in hand, and I felt rather like the heroine of an old-fashioned movie as he leapt off his horse at my feet. “Here’s your raincoat Ma’am.”

He called me today and said to let him know when I’m coming back and he’ll have a horse ready to take me out riding. He would have led me off on a moonlit ride if his other horses had shoes on their feet, but he does his own shoeing and Blondie was the only one ready to go. How crazy would that be? I will definitely call him if I am ever in Montrose again. Maybe when I come back to go the Mountain Man Rendezvous with Coon Skinner!? I am giggling to myself imagining what a story that would make!

As often happens, by the time I make friends in a town it’s time to leave. I stopped by the local fairgrounds on my way to the freeway and watched kids showing their dogs and I was hit by the beautiful sweet simplicity of a small, normal town. It made me feel sad to leave. I remembered Eddie’s good by the night before holding his hand out to me from atop his horse. As I put mine in his he leaned way down and sweetly kissed me quickly on the lips. A gentle, “every little girl’s dream” kind of kiss. If I ever get back here I will know who to call, and I even have a guest room to stay in on a mountain man’s ranch outside of town.